The way audiences consume video content is changing; YouTube reaches more 18-34 year olds on mobile alone than any US cable network, Facebook is currently driving 8 billion video views per day, Cisco says that by 2020, 75 percent of mobile traffic will be video and 80 percent of Internet users own smartphones.

With brands racing to keep up with changes in audience behaviour, what does 2017 mean for video? Which content formats will thrive and how is mobile being considered? Think Jam’s Founder & CEO Daniel Robey believes success lies in native. Hot on the heels of Think Jam and video content creators Intermission new partnership announcement, Journalist Rhodri Marsden asked Daniel about his vision for video for the year ahead.

R: When it comes to a movie campaign, how should mobile video content assets be created differently to more traditional video content?

D: In today’s fast-paced world, mobile media should be given even more care and attention than TV spots, with different cuts based on data. Key considerations should be relevancy, platform (i.e. the way the content is viewed), and attention to scale, audio and messaging. Creative video formats such as vertical and the use of kinetic typography are also evolving at speed and should be thought about when planning a mobile video strategy. Thinking natively, whilst TV commercials are generally product-centric, native video ads are guided by editorial, which leads to a highly shareable end product.

R: Do you sense a shift in prioritisation towards video content in mobile marketing?

D: Yes and that shift is essential. Taking into consideration time limitations and the accessibility requirements of modern day living, mobile video content is one of the most effective ways to engage with an audience and build a narrative. The film industry is one of the best-placed industries to be driving forward innovation in video. There are so many opportunities to create authentic, emotive and relevant content for mobile. Live and 360 for example, are perfect formats to deliver engaging behind-the- scenes teasers or Q&A sessions for fans. Over the past decade, we have seen many brands from various industries draw upon the entertainment industry for inspiration to create content.

R: Which brands would you say are doing video content well at the moment?

D: Burberry and AirBnB are doing some really interesting work in the brand film realm. Coors Light has created some engaging 360º mobile video ads, Adidas seem to be positioning themselves as leaders in mobile video, and Spotify’s branded moments have really embraced vertical video.

R: The idea of vertical content – understanding the way people hold their mobiles – seems to be critical in all this.

D: Definitely. When you go onto YouTube you turn your phone to the side, but on Facebook, Instagram or Twitter, everything is vertical. We all need to be thinking in terms of square or portrait content. There is also evidence that vertical content has a higher number views, share/engagement rate too, with Snapchat claiming for over a year now that vertical ads are viewed to the end nine times more frequently than horizontal ones.

R: What do you think the consequences are of using material that has been repurposed, rather than made natively?

D: Audiences are smart. They know what they want and they know when something isn’t quite right. Just as when a tweet strikes the wrong tone, it’s the same with incorrectly repurposed video. The key is to build a narrative with video and deliver relevant content to audiences in their time, which will encourage sharing.

R: What do you think the optimal length is for video content, bearing in mind the speed with which people are scrolling through?

D: Facebook say three seconds constitutes a video view. Some might argue with that, but for a six second piece of video content, it works. They have also just announced that they are investing heavily in short form video content, so priority is being placed on digestible formats to feed audience appetite. It’s interesting that a few months ago Instagram increased the maximum length of a video advert to 60 seconds to allow advertisers to use their existing content, repurposed. I think that goes against the spirit of native video. The trailer and the TV spot will need to be reinvented for these environments. The overall trick of course is to tell your story through video in as short a time as possible!

R: It must surely be content dependent too, there can’t be a one-size-fits-all solution to this.

D: Yes. Silence, the recent movie from Studiocanal, had its online trailer launch held back precisely because of the epic, panoramic cinematography of the movie. They wanted to ensure that audiences experienced it on the big screen first, in its native form. This technique shows a great understanding of the audience and limitations of certain platforms, they wanted to present the movie in its truest sense. Further to this, data on audience viewing habits should also be constantly analysed to inform creative content decisions.

R: Of course, it’s easy to demand native content is created, but there’s obviously a cost involved in doing so.

D: With all the various permutations, through Facebook to Snapchat to Instagram and beyond, it becomes cost-prohibitive. But that’s precisely why it’s important to identify which content needs to be created, for which audiences and which platforms, based on the marketing strategy, the data and analytics. Making these decisions pay dividends in marketing success and are essential to remain competitive.

R: Finally, given that there’s so much in people’s timelines, what do you see as the most important changes that need to be made to lift engagement?

D: Aside from the horizontal-vertical question, video on most social platforms begins as audio off, so how do we get over that? We need to be thinking about how to create those attention-grabbing moments without using sound. Videos with text are 11% more likely to be viewed and have 28% higher completion rate, so carefully crafted and placed copy is a solution. It is also claimed that videos with an early story arc are 58% more likely to be viewed, so narrative is crucial. Something that’s clear is if you use up ten seconds of time with logos, green legalese and slow fade-ins, you’ve already lost your audience. We need to go straight into cuts that maximise impact. Those first few seconds are vital.

VidCon 2017: The Creator and the Community 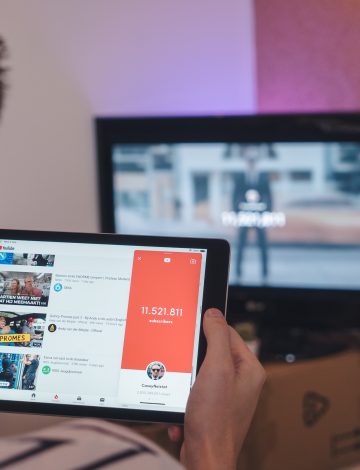